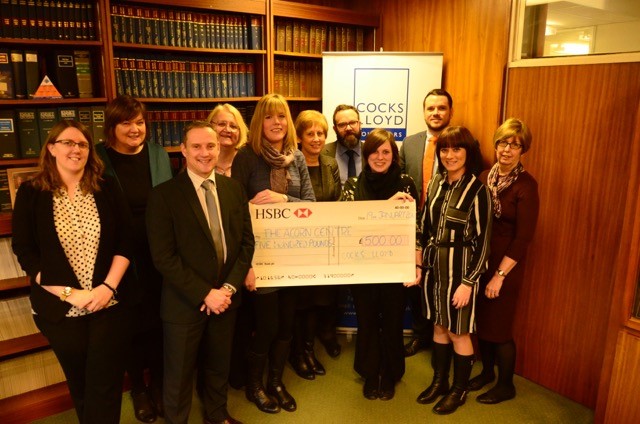 The staff at Cocks Lloyd are proud to have contributed toward the purchase of new IT for their nominated charity,  The Acorn Centre.

The updated computers were purchased to help the Centre with its vital counselling work supporting women and men in the West Midlands with pregnancy related concerns.

Cocks Lloyd handed over £500 to the charity towards the computer equipment, which the charity says has transformed the way they work.

Cheryl Liddle, one of the Trustees of The Acorn Centre, said: “The donation from Cocks Lloyd has made such a big difference to the work at the Centre. The updated computers are much faster than our old ones and all our software is now up to date. It means our team can work faster to help support people. We are so grateful for all the money that Cocks Lloyd has raised for us. We are such a small charity so every penny counts and means so much to the people who need our services.”

Cocks Lloyd has been fundraising for The Acorn Centre since last May after employees chose the service as its charity of the year. A range of different fundraising events such as bake sales, a summer BBQ and a quiz have all helped to raise a substantial sum for the charity. Cocks Lloyd decided to hand over some of the money early so the Centre could update its technology.

Cocks Lloyd Partner, Sharon Wilkinson said: “When colleagues heard about the state of the computers at the Centre and how long it was taking people just to access their emails, we all really wanted to do something to help. It was really important that we donate a portion of our fundraising to them as soon as possible so our money could have an immediate impact. We are really proud of the team at Cocks Lloyd for raising the money for such a great cause.”

The Acorn Centre, based in Nuneaton offers counselling and support for women and men who are coping with issues including infertility, baby loss, unexpected pregnancy, pre and post abortion and postnatal depression. They also offer counselling for young adults on a range of issues.

For more information about The Acorn Centre, visit www.acorncentrewarks.org.uk or call 02476 381878.